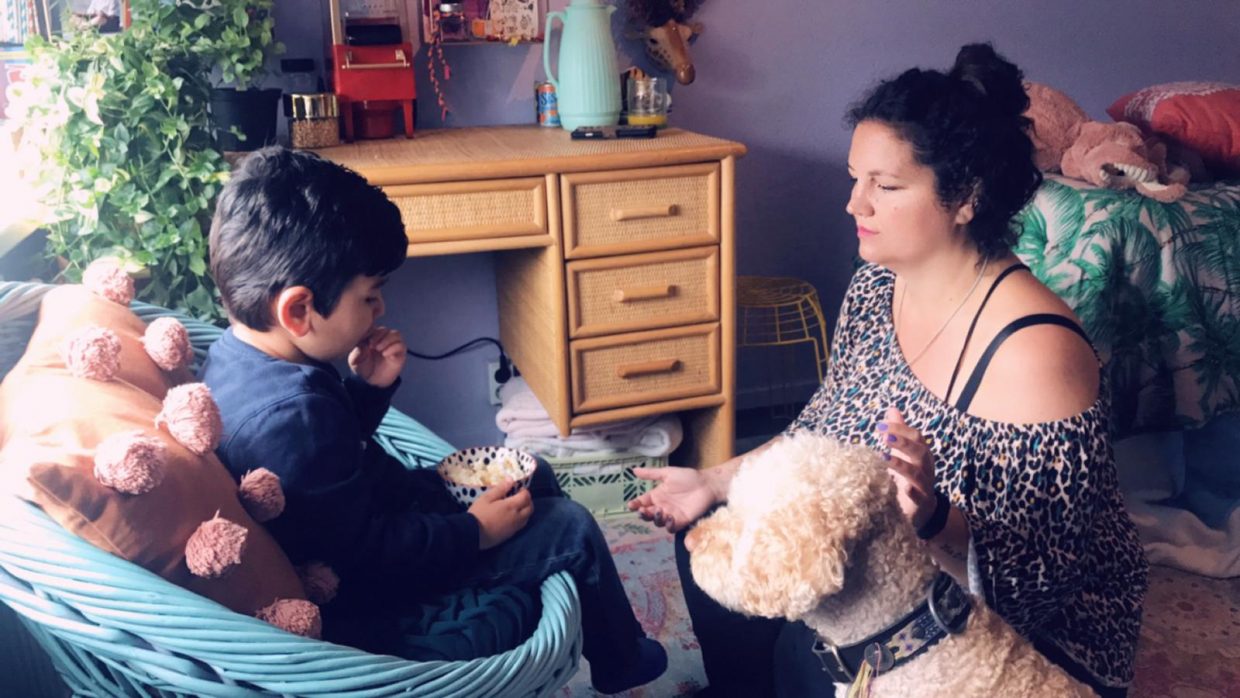 “If I can do this, it would be very silly to keep living the way I do,” Annemijn Janssen reflects on the insight she received during her encounter with a monk in Myanmar. In her colorful home practice, with labradoodle Nobel at her feet, she talks about how the plan for opening her own practice came to be and about her mission: “If you’re already aware of who you are when you’re a child, it will save you many thoughts and a lot of hassle at a later age.” How does Annemijn use her gift to help children and adults achieve a better self-image and more self-confidence?

Annemijn lives and works in The Hague, The Netherlands, the city where she was born and raised. She grew up in a stable and safe community as a happy, sensitive girl with a huge sense of responsibility. She knew from a young age that she would be working with people. She considered disabled care, but ended up in the beauty industry. In 2014, she had a job as a representative for a cosmetics company when she traveled to Myanmar for a life-changing journey.

Too hippie and too enterprising

“On our last day in Myanmar, a monk called me to him during a gathering,” Annemijn tells about this trip. “I looked behind me; he couldn’t have meant me, right? I went to sit by him and we got to talking. ‘You do know what your mission is, here on earth?’, he asked me. I mentioned that he must also feel energies and he started laughing.” What was clear as day to this monk, was something for Annemijn that finally fell into place: “As a kid, I was extremely aware of my environment and I was very empathetic. I thought everyone else felt the same things I did. As I got older, people often told me: ‘You always say the exact right thing when I’m struggling with something’. During my time in the beauty industry I noticed that I couldn’t just feel other people’s energy, but that I was also able to remove unwanted, negative energy from people. That’s when I realized: this is really something special, I can help people with this.” The conversation with the Burmese monk made Annemijn decide to start her own practice. When her contract with the cosmetics company wasn’t renewed – her boss called her “too hippie and too enterprising” – nothing seemed to stand in her way anymore.

Out of the spiritual closet

“I found it daunting to come out of the ‘spiritual closet’. You have to truly believe in yourself and open up your gift to the outside world. I immediately felt this enormous responsibility to the people who would come to me at their most vulnerable,” says Annemijn about the events that followed. “I started with very consciously investigating how I wanted to give shape to my life’s work. I read a lot and visited many different gatherings. My sister and brother-in-law knew what I was doing and reacted very positively. They did wish me luck telling our parents. My father worked in the medical world and my mother is very religious: two worlds that aren’t very open to healing through energy. My mother asked me, shocked, what I was doing. My father found it all to be very vague. In a strange way it helped that they both were seriously ill at the time. I could tell my father exactly where his tumor was located and what kind of pain he was feeling. I took my mother to a reading about shamanism. Looking back, that was a huge risk, but the things she learned about nature, ancestors and energy rang very true to her. When I got an acquaintance and their neighbor out of their respective burn-outs during some of my first therapy sessions, I knew that what I was doing was more than a hobby. This was real healing.”

“When someone tells me something I don’t just hear their words, but also the feeling behind them: the actual thing they mean. I also see pictures in my mind. That’s how I was able to see the exact trauma behind someone’s breathing troubles. When I open myself up to it, I receive all kinds of information, even about strangers on the street or the cashier at the supermarket. I can connect to someone’s soul, which enables me to feel the core of someone’s pain. As energetic therapist, I remove unwanted energy, making room for new life energy.” When a bad self-image seemed to be a recurring theme among her clients and when more and more children visited her practice, Annemijn realized something: “If you’re already aware of who you are when you’re a child, it will save you many thoughts and a lot of hassle at a later age. Sometimes parents don’t see how sensitive their child really is. What they see are the temper tantrums and that a kid might fail in school. Even though I grew up in a warm and safe family, my sensitivity wasn’t recognized when I was little. During my sessions I want to make sure a child feels comfortable in their own skin. Parents see their child change for the better and decide to undergo energetic therapy themselves. I have entire families coming for treatments.”

“Children are very close to their feelings and don’t usually overthink like adults do. A child doesn’t identify with a job or a house,” Annemijn continues. “That’s why I prefer working with children and it’s also why my method works quicker on them. I see myself as an old soul full of youthful energy. I approach things in an airy and humorous way; children like that. A treatment won’t be more effective if you’re being very serious!” That is why Annemijn started a separate practice for kids called ‘Tante Mijn’ or Aunt Mijn. “That name represents warmth and love. I’m close to the child, but I’m not their mother. They can tell me anything and everything, without filtering anything out. It’s also a lot easier for a kid to say they’re going to Tante Mijn, instead of saying they’re going to therapy. To give all children in general more confidence and a better self-image, Annemijn developed a lesson plan for schools. “The world is hard and performance oriented. I want to teach children that they don’t need the acknowledgement and approval of school results or social media.” The program consists of eight classes for groups 6, 7 and 8 and deals with questions such as ‘Who am I really?’, ‘How do I see myself and others?’ and ‘How can I charge my own batteries?’. “In this way, I want to prevent children from thinking, like I did, at the end of their school years: ‘I know who Columbus is, but who am I?’,” Annemijn concludes with a stunning smile.