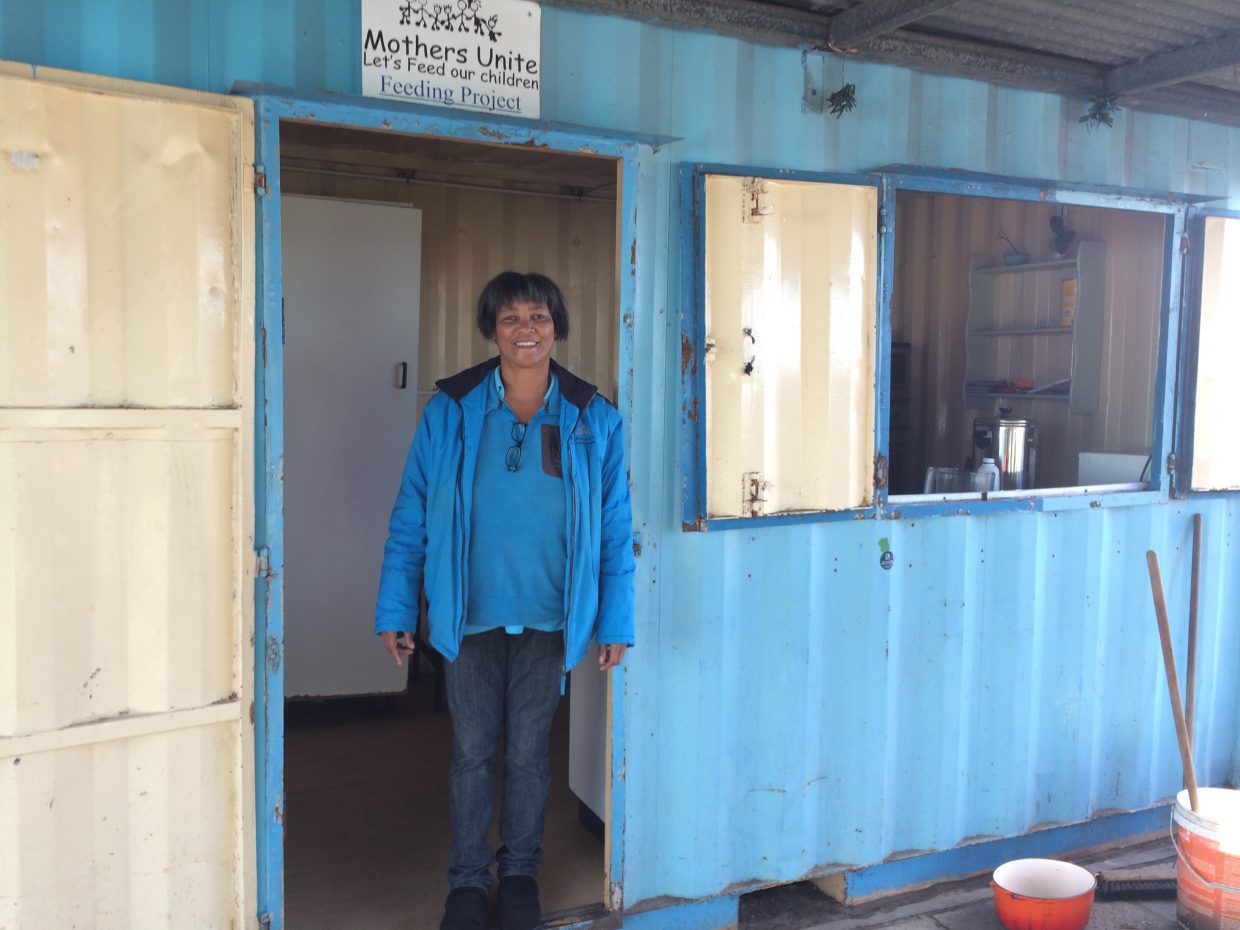 “One day I stood outside gazing down the road when I saw this group of children. They were sharing only one piece of bread. It struck me: there’s a lack of nutrition! This thought wouldn’t leave me,” Carol Jacobs explains at ‘Mothers Unite’ in Lavender Hill near Cape Town, South Africa. “Our kids are broken. The bullying at schools, the number of teenage pregnancies and single mothers, I’ve seen it increase over the years. Children look up to negative role models, like the drug lords they see on the streets. I want to show them there’s more to life than what they see in this community.” How is Carol doing this with Mothers Unite?

Carol grew up in Cape Town with five siblings and her mother as her role model. Carol never wanted to move to Lavender Hill because of the negative vibe to the area. Being a single mother of three daughters she ended up there because it was where she could afford a house. After having worked in electronics for 25 years Carol took her terminally ill mother into her house. This meant a turning point in Carol’s life.

A soup kitchen? Not now!

“As I took care of my mom, I learnt about compassion. I became more aware of the things happening around me and started to listen to the gentle voice inside me,” Carol shares about this period in her life. “Before my mom passed on she gave me a big pot and a two-plate gas stove.” After her mother’s death Carol saw the group of children sharing one piece of bread. “After seeing that each time I put on the radio or the TV it was about soup kitchens. I struggled for two months: ‘I’m a single mother, I have three children I need to put through school, I don’t have finances. A soup kitchen? Not now!’ Then two other mothers came to me with the same idea. That was the confirmation of the Lord I needed.” Carol started a soup kitchen from her house with the financial support of her family and the church. “We started in 2007 with three mothers feeding twenty children. Within two years we had thirteen volunteers and 150 kids.”

The children kept on coming

“We couldn’t wait for government or for church leaders to do something about the malnutrition of our children. It was us, mothers from the community who saw this need and acted upon it. I’m a hands-on person. I want action, but as the children kept on coming, I couldn’t go on like that. We needed to start an organization and we needed land. This was a journey on its own that took us two years of meeting after meeting. We started out with twenty organizations for this piece of land. The local government wanted us to collaborate. One after the other quit. In the end it was just us.” In 2009 the first Mothers Unite container – that still serves as the kitchen – was put on the land with help from ‘Breadline Africa’. After that more containers for more activities followed: “We go to parent and school meetings to identify kids’ needs in our community. We noticed illiteracy was a problem, so we started a library and homework support. The children need a safe place to play, that’s why we developed a playground.”

Now Mothers Unite serves 80 to 90 children a year with nine volunteers from Lavender Hill and as far away as Germany. The children come in after school to follow a program, after which they have a nutritious meal from the soup kitchen before they leave. Next to the playground and the library, there are also containers for inside activities such as a computer lab and an arts and crafts space: “Through art they learn to express different emotions. And we have someone who comes with dogs and educates the kids about responsible pet ownership. Children can heal through pet contact and learn about social behavior in general. Especially the new ones struggle with the rules at Mothers Unite: no bullying and no aggression. If a child gets into trouble too many times I have them come talk to me. I ask the parents if there’s a reason why the child is bullying. Not everyone can deal with social issues. Mothers can go through depression while children want to be seen. Some make a special effort to get attention, so we embrace them a lot. God gave me not just my own three daughters, he gave me a whole community of children.”

The youth has the answers within them

“We would love to pay the people that work with us. You must have the passion to work here, but you also need finances to keep the lights on. That can be a reason for people to leave us,” Carol elaborates on their volunteers. To generate funds, she started a backpackers in her own house. Foreign volunteers can stay there and have their family and friends joining them when they are visiting. “Single mothers are doing the washing and the cleaning, so they can get some money,” Carol explains. On Tuesday mornings Mothers Unite hosts a group of seniors and community members can make use of the computer lab during school hours. Children remain the central focus of Mothers Unite though: “I want to be the voice for our kids. Even if I save one child, it’s worth it. You never know whether a child will be the future president of South Africa. And then there are the children who came to Mothers Unite ten years ago who are now volunteering with us. They are our fruits. There’s so much potential amongst our youth, they have the answers within them. I would like to see the young generation take over. In due time also my seat, so I can join the senior group, here, at Mothers Unite,” Carol concludes with a smile.