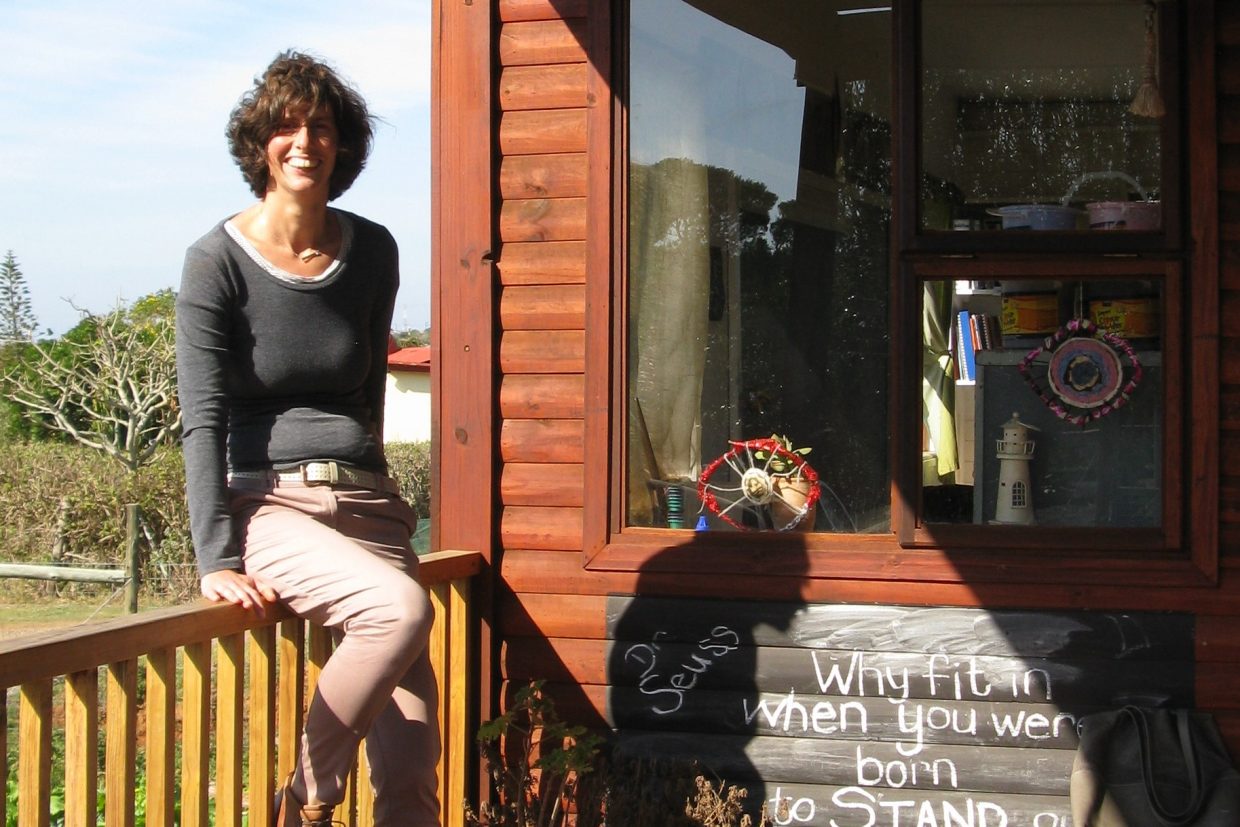 “When we moved from Cape Town to the Eastern Cape of South Africa, my husband and I said to each other: ‘If we don’t find a school we like, we’ll start our own’,” Anouk Verheijen explains sitting at one of the children’s tables at ‘Bushwillow Primary School’ in Kenton-on Sea. “I like that my kids go to school in a diverse environment, with people from different walks of life. I want this for my own children and for the wider community.” Anouk feels traditional education is not preparing children for ‘the new world’ and the challenges South Africa faces: “The high inequality in our society affects everyone.” How is Anouk making the change with Bushwillow?

Born in The Netherlands, Anouk came to South Africa for the first time during her history studies. While conducting her master’s research, she met her future husband Stephen Wigley there. They built their life together, Stephen working in construction and Anouk being a consultant for sustainable business practices, moved to Cape Town and started a family. Looking for a quieter and more child-friendly environment to raise their kids, they moved with their three, now four, children to Kenton-on Sea in the Eastern Cape in December 2014.

Not open to learning when in fear

“The following year our eldest went to a local primary school. If she forgot her book, she was not allowed to play outside. This thought alone gave her huge anxiety. When you’re in fear, you’re not open to learning.” Experiencing this through her daughter and hearing stories from other parents, Anouk decided to arrange a meeting. Teacher Jessica van Graan was amongst the parents present: “Jess always wanted to start her own school. The two of us spent the next couple of months developing the concept: we needed to decide on the curriculum and learned about the educational philosophy of ‘Reggio Emilia’. This philosophy takes the curiosity of children as a starting point. The old-school authoritarian approach isn’t preparing kids for the new world, that asks for critical, but also creative thinking in order to solve problems. With our Reggio Emilia inspired education, children learn through exploration and discovery. Boundaries are still necessary, but the child can choose within them and rules are set democratically.”

Starting from the unknown

At the second meeting Anouk and Jessica could present their ideas to an expanded group of people interested in the new school. A trust was formed, the school was registered and a couple of months later they obtained a piece of land through Angie and Ron Engert, who run a soup kitchen in Kenton. The school got the land for free under one condition, Anouk explains: “For every seventh child that registers at Bushwillow a full bursary is given to a child from a poor background getting food at the soup kitchen.” While the land was there, a lot of other aspects still needed to be sorted out, such as finance for school buildings and finding suitable teachers and additional families that wanted to be part of a starting school. “We were determined to open the school in January 2017, we just wanted to make it happen,” Anouk emphasizes. “It has been a remarkable time for me, because I like to have the feeling I’m in control. Through this whole process I’ve learned that if you’ve thought clearly about what it is you want to do, you need to trust that things will fall into place.”

And they did: a prefab building was put in place towards the end of 2016 with a loan from one of the trustees and Anouk’s dad. Teacher Jessica decided to volunteer the first year so that the school could pay a full salary to the second teacher needed. And did 2016 end with 13 registered children, at the start of the 2017 school year Bushwillow had the full number of 30 registrations needed to open the school. Now, almost two years later, Bushwillow houses four classes, of which one is pre-primary, with a total of 53 children, four teachers and three assistants. The whole school works with one central theme at a time, for instance ‘ecosystems’: “How the children explore the theme is their choice. We offer bush walks and if a child finds an insect he’s interested in, he can learn more about the place of that insect within the ecosystem. I think it’s important to teach children early on about options they have and to think about what they like. That’s why every Friday we have people coming in to tell about what they do and how they came to do it. Offering choices to kids can be a starting point for a more equal society.”

Serving the school towards the future

The board, on which Anouk serves as a member, is there to support the staff: “Give teachers full control and trust, don’t burden them with administrative tasks, so they can focus on teaching. In five years I would like the team to be self-functioning and more diverse. Having black male teachers as role models would for instance be of great value.” Anouk’s focus is on fundraising for Bushwillow, which she does next to her job as a consultant and taking care of four children: “We need more funds to be able to hand out bursaries to kids from poor socio-economic backgrounds and to further develop the school’s infrastructure at the same time. We need to put permanent structures in place and have the way we teach completely embodied in the school’s layout.” Expanding with a high school and a campsite to generate income, are also ideas Anouk is actively pursuing. “People come here and see what we’ve build in two years, but I always see the missing pieces. Where do we want to go and what do we need to do to get there? I like to look at the bigger picture.”